Three YPJ fighters, commanders and pioneers of the women’s revolution who liberated NES from ISIS, were assassinated by Turkish drone on their way back from Women’s Forum. 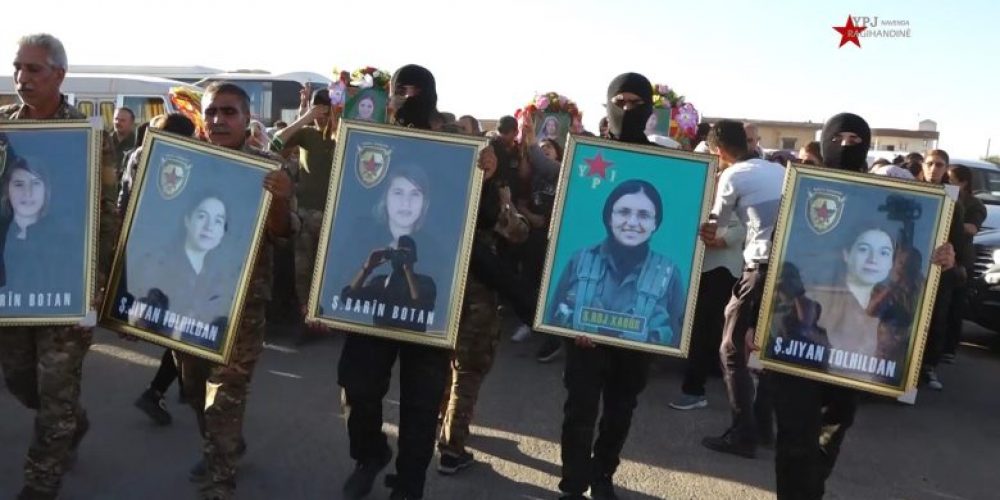 Erdogan’s fascist regime, with its proxy forces of ISIS mercenaries, who have always been enemies of the Rojava revolution and its proponents, want to achieve their aim of annihilating and defeating women’s power with their daily brutal attacks. They want to destroy the power of women who lead the struggle for freedom by targeting this revolution. These attacks occur right in front of the coalition forces and Russia who are present in the region, yet these international powers turn a blind eye and do not respond. Therefore, they are just as responsible and involved as the forces that are physically carrying out the attacks.

On July 22, the occupying Turkish state attacked a car on the road to Qamişlo with a drone. As a result of this attack, comrade Jiyan Tolhîldan, one of the leaders of YPJ (Women’s Protection Units) and SDF (Syrian Democratic Forces), as well as the general commander of YAT (Anti-terror Units), alongside comrades Roj Xabûr and Barîn Botan were martyred upon leaving the Women’s Revolution Forum that was held in the city of Qamişlo. We offer our condolences to the Kurdish people, all the people of North and East Syria, and the SDF for the martyrdom of our comrades and commanders. We promise to avenge our martyrs by protecting and expanding the Rojava revolution, defeating the occupying Turkish state and ISIS mercenaries, and ensuring the liberation of Rojava and North and East Syria.

The YAT commander, Jiyan Tolhîldan, whose real name was Selwa Yusuf, had witnessed all the difficulties throughout different stages of the revolution. Right from the beginning of the revolution she worked hard with great dedication, from organizing people and forming the People’s Self-Defense Units (YPG), to creating the Women’s Protection Units army. It is only with the hard work and struggle of comrades and commanders like Jiyan that the Rojava Revolution became a women’s revolution that resonated all over the world and is now a hope for the freedom of all women and humanity.

Thanks to the efforts of our fallen comrades, this revolution has reached its tenth anniversary. The strength and will of commander Jiyan have instilled belief in a free life within all women and society. Women and youth from across Rojava and the whole world have given their hearts to this revolution, flocking to Rojava. Commander Jiyan had great knowledge and experience of the Rojava revolution and the beauty of free life, and with this expertise and knowledge she trained hundreds of fighters who today will continue the legacy of her struggle and guarantee the freedom of their homeland.

Comrade Jiyan had taken part in all the liberation campaigns of Rojava and North and East Syria with the spirit of a free woman. She fought against ISIS terrorists who were a nightmare for humanity, and also fought alongside the coalition forces, participating in all the liberation campaigns. Thus, the struggle of commander Jiyan Tolhîldan is the hope of a free life for all humanity.

Comrade and commander Roj, whose real name was Ciwana Heso, grew up in a patriotic family in Al-Dirbasiyah. Within a short time, she gained experience within the ranks of the revolution and embraced the philosophy of women’s freedom. She became a revolutionary woman with strength and willpower. She lived believing in the philosophy of freedom and carried out her revolutionary and patriotic duties and responsibilities until her very last moments. She spent every moment of her life fighting for a free homeland and had participated in the liberation campaigns against ISIS alongside the coalition forces. The world got rid of ISIS thanks to the courage and bravery of comrades Jiyan and Roj.

Comrade Barîn Botan, whose real name was Ruha Beşar, grew up in Afrin in a patriotic family. She was inspired and influenced by the Rojava revolution in her search for freedom, and thus joined the ranks of the Women’s Protection Units (YPJ). Comrade Barîn had always experienced intense anger and hatred towards the Turkish state and fought with great determination and persistence to defeat the occupation.

The popular revolution in North and East Syria was achieved with the hard work and sacrifices of the martyred comrades and on the foundation of women’s freedom. It has become the hope of freedom for all women and freedom-loving societies. As YPJ forces, expanding and protecting the revolution and guaranteeing the freedom of Rojava is our duty and the oath that we have given to our comrades and leaders. Once again, we offer our condolences to all our people and the YPJ and SDF. We promise that we will avenge our comrades from the occupation forces and their agents. This attack will not make us retreat one step in our struggle; it will only increase our anger and resistance. At this time, in which our revolution and its leaders are targets of annihilation attacks, we ask all the women of North and East Syria to participate in this struggle.

The identities of our martyred comrades are as follows:

Date and place of birth: 1992- Dirbêsiyê