The operation Humanity and Security 2 in the al-Hol camp, eastern al-Hasaka was successfully completed. 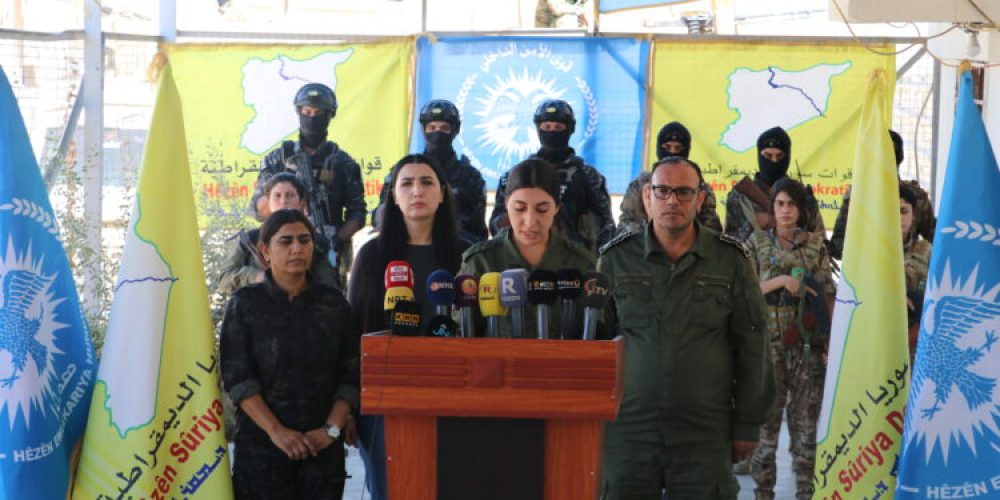 The Final Statement regarding the completion of Operation Humanity and Security 2 in the al-Hol camp, eastern al-Hasaka

First, we recall our two martyrs, Jasour Khabat and Odai Juneidiah, who sacrificed their pure blood and were martyred due to clashes with an ISIS terrorist cell during Operation Humanity & Security in the al-Hol camp. We reiterate our pledge to follow their path, bringing victory to their sacred Cause, and we wish speedy recovery for our wounded comrades.

On August 25th, our forces enabled by the SDF and the International Coalition against ISIS launched the second phase of Operation Humanity & Security in the al-Hol camp, eastern al-Hasaka, to hunt down ISIS sleeper cells and drain the environment enabling them to commit terrorist acts against the camp residents, workers of the humanitarian organizations, and the Internal Security Forces protecting the camp. The operation lasted for 24- days, and it has achieved many tangible results. The following are the operation facts:

1- Over the past period, the operation has been postponed due to Turkish threats and attacks. Because our forces were preoccupied with defending the region and its population against those attacks, the threats ISIS poses have increased significantly.

2- The necessity: The operation was launched following the increasing crimes of killing and torture committed by ISIS cells against the camp residents who refused to join or support the terrorism of ISIS, so the terrorist cells sentenced them to death, spread terror and intimidation among them, forced them to choose between joining ISIS cells or be brutally tortured to death. These crimes amount to crimes against humanity and have claimed, only this year, the lives of 44 camp residents and humanitarian workers. ISIS cells, especially women, cast many camp women and their children as apostates, putting them on the execution list, pressuring and extorting them, and forcing them to pledge allegiance to ISIS or be forcibly evicted from their camp, leaving them homeless.

In parallel with their attack on the al-Sana’a prison, ISIS cells were planning to control the al-Hol camp. Back then, ISIS cells started moving inside and on the perimeter of the camp, nevertheless; their planned attack has been thwarted inside and outside the camp, thanks to the urgent security measures taken by our forces and the SDF. However, ISIS cells continued the attempts to carry out their schemes taking advantage of the recent Turkish attacks in a quite clear harmony between both attackers.

In facing that, our forces launched the operation that led to immediate achievements that manifested in arresting many terrorists involved in planning those brutal crimes in addition to several collaborators responsible for facilitating the communications with the ISIS cells abroad, in addition to saving and securing the lives of many potential targeted residents and vulnerable IDPs and moving them to safer places.

3- ISIS has depended mainly on women and children, as real resources related directly to the ISIS leaders, to maintain the ISIS extremist ideology and spread it in the camp. For this reason, ISIS women have held many tutorial sessions and courses to indoctrinate women and children with the ISIS extremist ideology. ISIS was preparing the children, especially that above 8-year-old, to exploit them in potential attacks. Therefore, there were several attempts to resurge the so-called “Caliphate Cubs” and the female religious police called “the Female al-Hisbah” that was responsible for many executions. Using emotional speech sometimes and other times by verbal and practical threats, 2ISIS women have upgraded their malicious activities by trying to recruit women and children.

Our forces have destroyed a lot of hotbeds and points designated to spread the terrorist ideology, arresting many dangerous women who were in charge of these points and responsible for recruiting terrorists inside and outside the camp, promoting the ISIS extremist ideology, and being involved in criminal acts against the camp residents. Furthermore, our forces have dismantled “the al-Hisbah” and “the Caliphate Cubs” by arresting the terrorists in charge of them.

4- ISIS women have taken advantage of the provided resources, especially the communications and money transfers, to transmit information, to inciting ISIS cells, and network them together inside and outside the camp. Our forces have found many communication devices and documents proving using these resources to communicate with the terrorist cells in the Turkish-occupied areas and to receive schemes for spreading the chaos, preparing terrorist attacks, and escape attempts, in addition to receiving the money that helps in attracting the poor youth. According to initial investigations, our forces came up with the addresses and names of three funding facilitators responsible for transferring funds into ISIS cells inside the camp. They were arrested in al-Hasaka city and the town of al-Hol by joint operations with the SDF and the International Coalition in parallel with Operation Humanity & Security.

5- Weapons confiscated: During the operation, our forces have confiscated many weapons, including bombs, medium weapons, silencers, and pistols, which were used by ISIS cells in their terrorist acts, in addition to uncovering and destroying many unfinished tunnels and trenches used by ISIS cells to hide themselves and their weapons, preparing to escape the camp. Based on the investigations, the confiscated weapons have come from three sources, the first, some humanitarian workers especially (the Bahar organization) were involved in introducing weapons and money and smuggling ISIS elements and women. Second, some individual weapons and bombs were introduced by ISIS women and children by hiding under their clothes and among their luggage when they had been transported from al-Baguz. At that time, a large number of women and children, the lack of security techniques, and the difficult logistical and security conditions had made it impossible to detect these weapons. Third, the terrorist organization exploited the material provided in manufacturing sharp weapons such as daggers, knives, bayonets, and horrific torture instruments to intimidate the residents, forcing them to succumb.

6- The kidnapped Yazidi women: During Operation Humanity & Security, the YPJ freed two Yazidi women from the grip of ISIS extremist women, and transferred them to a safer environment. Over the past four years, more than 200 Yazidi women and children were rescued from the camp by the YPJ. The YPJ encountered many obstacles to reaching these women and freeing them, the most important of which is the fear of revealing their Yazidi identity by impersonating foreign personalities and blending into the lifestyle of ISIS women to protect their lives under threats by ISIS women. The lack of data, photos, and necessary fingerprints of these women in the competent agencies, in addition to the lack of cooperation from the Iraq authorities in this regard, notes that the search operations will continue until the rescuing all Yazidi women inside and outside the camp, and this mission is considered basic, strategic, and irreversible. In the same context, the YPJ has also freed four non-Yazidi women who were chained and brutally tortured by ISIS women. The investigations are ongoing to find out the whereabouts of these incidents and those responsible.

7- The humanitarian side: Our forces, which faced real dangers from terrorist cells during the search and sweep operation, have taken into their account the sensitivity of the humanitarian aspects inside the camp and provided practical guarantees that humanitarian aid will continue to flow to the camp residents at the same speed as before, and they have shared additional aids from the quotas of their members to some families in need.

Despite the provocations by ISIS cells, especially their women, who tried to distract our forces and disrupt the operation with side problems to help the terrorist cells to hide and flee, the operation proceeded without mistakes except for some related to the lack of sufficient security technology. The terrorist cells resorted to hiding by wearing women’s clothes, but this did not prevent our forces from
detecting them, paralyzing their ability to move, and preventing them from harming the residents.

8- International duties: Over the past period and despite their preoccupation with confronting the attacks of the Turkish occupation and its mercenaries, our forces and the SDF have made great sacrifices by preventing the time bomb in the al-Hol camp from exploding, and contributing to improving the lives of the camp residents despite the threats of ISIS cells, furthermore; by Operation Humanity & Security they have removed many dangers and defused the time bomb of the camp, yet the bomb itself and its risk still exist. Therefore, it is necessary to remind the international community of its duties, especially after it has recently underestimated the seriousness of the threats in the camp.

In this regard, we reiterate our call on the countries that have nationals in the camp to repatriate them and not to leave them to be exploited and recruited by ISIS.

We also call on the relevant international parties to note the organic relationship between the Turkish intelligence services and ISIS cells inside and outside the camp, and we call on them to hinder the movements of ISIS leaders in the Turkish-occupied areas, especially those responsible for directing and inciting cells and their women in the camp. The investigations with the arrested terrorists confirmed the close relationship between the Turkish occupation and those cells, especially in the field of carrying out terrorist acts or smuggling attempts of the terrorists and their families to the Turkish-occupied areas, rehabilitating them and using them in potential Turkish invasions against our areas, just like what happened to the Ain Issa camp and smuggling ISIS families by Turkey.

Finally, we in the General Command of the Internal Security Forces of NE Syria commend the commitment, discipline, and highly competent of our forces and other forces that participated in the operation, and we highly appreciate the sacrifices they made to ensure security, protect humanity and prevent ISIS from exploiting the camp. Once again, we extend our heartfelt condolences to the families and comrades of the operation’s martyrs, and we also thank the camp administration for redoubling their efforts by continuing to help and assist the camp residents during the operation, in addition; we thank the YPJ, the SDF, and the International Coalition for their effective support.

We announce the end of the second phase of Operation Humanity & Security in the al-Hol camp, and our forces will continue to hunt
down the potential cells, confronting dangers by conducting regular security operations when necessary.

The following is the outcome of the ISIS arrestees and their weapons confiscated inside the camp:

PrevPrevious StatementOperation Security & Humanity 2 in Al-Hol camp
Next StatementYPJ on Turkish attacks: We will defeat this genocidal mentalityNext